Since the invention of CPA [1], a method of generating high-intensity ultrashort optical pulses, it has evolved to become one of the most dominant techniques [2]. Further advances of solid-state and fiber technologies have enabled both compact and less complex high-power ultrashort pulse lasers to be built, in order to address the industrial market. Material processing applications like glass cutting or the dicing of silicon wafers have
revealed a further demand for the advancement of ultrashort lasers. These lasers need to meet the following main industrial requirements: they must be robust, as well as having a stable pulse to pulse energy and beam profile. Moreover, the abovementioned features need to be ensured in serial production. All of this has dictated the requirement for optical components to be used to build such industrial lasers.

Figure 1. Schematic of the CPA system.

Even though there are many variations of compressors, most of them have the same main construction (Figure 1). There are components to compress the pulse, such as diffraction gratings, prism pairs, etc., and there are mirrors to reflect the beam. While the LIDT of diffraction gratings is considered to be a limiting factor for high power compressors [3], this limitation could be bypassed by choosing bigger gratings. However, this increase means that the size of the mirrors in the compressor should also increase, which results into challenges for keeping a low reflected beam distortion. Keeping in mind that mirrors face multiple reflections, the requirement for mirrors flatness starts to play a key role. But having flat mirrors is not enough, as these should also be well aligned. This is directly related to the angular precision of mirrors, and in the case of retroreflecting roof mirrors, it results in right angle and pyramidal errors. Flat and precisely angled mirrors reduce the time needed for the assembly of compressors, which is one of the key targets of serial production.

The stress-induced by mirror coatings is one of the main reasons why even very flat substrates get deformed after coating, and this eventually has an impact on the distortion of the beam profile [4]. There are several ways to overcome this issue; for example, by having thick substrates or by employing less stress-inducing coating technologies. However, these solutions have disadvantages, especially when lasers are being built for industrial applications where a small footprint of the laser is desired. As a result of all this, Altechna has developed a technique to compensate for the stress introduced by thick sputtered coatings. This technique allows the flatness after coating to be comparable to the flatness of the substrate before coating (Figure 2), and it could even be applied with relatively thin mirrors. Moreover, by using sputtering technology, the mirrors reach >99.99% reflectivity and the optimization of the group delay dispersion minimizes the impact of a pulse chirp, which eventually reduces the complexity of the compressor design calculations (Figure 3).

Figure 2. Measured flatness values before the coating (left) and after the coating with stress compensation (right), area 95 mm x 20 mm.

Figure 3. GDD measured in reflection for s and p polarizations.

Although the alignment of the diffraction gratings or prisms in the compressors might be considered as the biggest challenge [5], the precision of the mirror angles should also be taken into account. Mirrors with imprecise right angles will introduce additional complexity for the alignment, which in serial production equates with lower productivity. With this in mind, Altechna offers either free-standing mirrors with precise angles or mirror assemblies – so-called retroreflecting roof mirrors (Figure 4). Depending on the size of the mirrors, these could reach a +/-5 arcsec right angle and +/-1 arcmin for the pyramidal error. Controlling these two parameters reduces the time needed for the alignment while building the compressors. 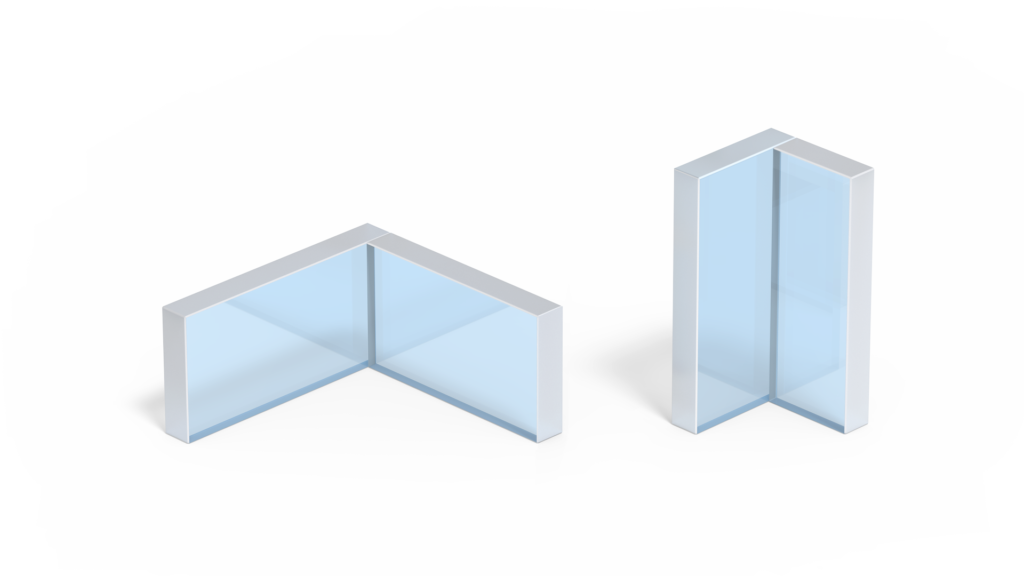 Environmental stability is one of the key requirements for industrial-grade lasers and systems. Stability needs to be ensured, even when environment conditions like the temperature or relative humidity are changing. It should also be noted that for laser components like mirrors, the impact of the environment typically appears as a spectral shift. This effect is mainly caused by the water absorption of the porous coatings, which eventually changes the refractive index [6]. To overcome this issue, Altechna is making mirrors with a sputtering technology that guarantees a bulk-like layer density which leads to environmental stability. The computer-controlled process ensures repeatability and a big coating area that is well-suited for serial production (Figure 5).

[3] N. Bonod and J. Neauport, Diffraction gratings: from principles to applications in high-intensity lasers, Vol. 8, No. 1, Advances in Optics and Photonics.